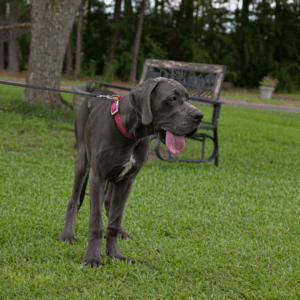 What Causes Dehydration in Dogs

No one wants to think of little Fido being sick or having a potentially life-threatening condition. Every pet owner should be aware of the possible situations or underlying conditions that increase the chance of dehydration in their pet. A key contributor to canine dehydration isn’t simply the loss of water but electrolytes. Dogs, like any mammal, lose and gain water throughout the day through urination, eating, and drinking. Dehydration occurs when water outtake is greater than water intake. Additionally, the loss of electrolytes reducing a dog’s ability to balance its pH, transport nutrients into cells, and regulate nerve and muscle functions.

Some causes of dehydration are:

The best way to prevent dehydration is to look out for dehydration signs and communicate concerns with a vet.

Signs of Dehydration in Dogs

Watch out for the following symptoms that could mean Fido is dehydrated:

Moreover, thick saliva, vomiting, diarrhea, loss of appetite, and lethargy are also signs that Fido could be dehydrated. The two symptoms of dehydration in dogs to spot and test for are skin elasticity and dry or sticky gums.

Testing for skin elasticity and dry or sticky gums is the easiest way to check for proper hydration in a dog. Additionally, to test a dog’s skin elasticity, gently hold Fido’s skin between its shoulder blades, gently pull up and then release the skin. Fido’s fur will return to its original position if Fido has adequate hydration. If Fido is dehydrated, the skin will take longer to return to its original position.

In addition to the skin elasticity test, checking Fido’s gums is another way to test for dehydration quickly. While feeling Fido’s gums to ensure they are not dry or sticky, gently press a finger against Fido’s gums. After releasing the finger, the gums should go white briefly and return to the original pink color. If Fido is dehydrated, the gums will not quickly return to their pink color.

After testing Fido for dehydration and the result being less than optimal, take Fido to their vet. If the vet office is not open, search for a local emergency vet to take Fido to.

We raise the woof with our dog services. Give us a call at (847) 212-5616 with any questions about our dog walking or other services. We are also available through email at office@doggy-detail.com or fill out our contact form.